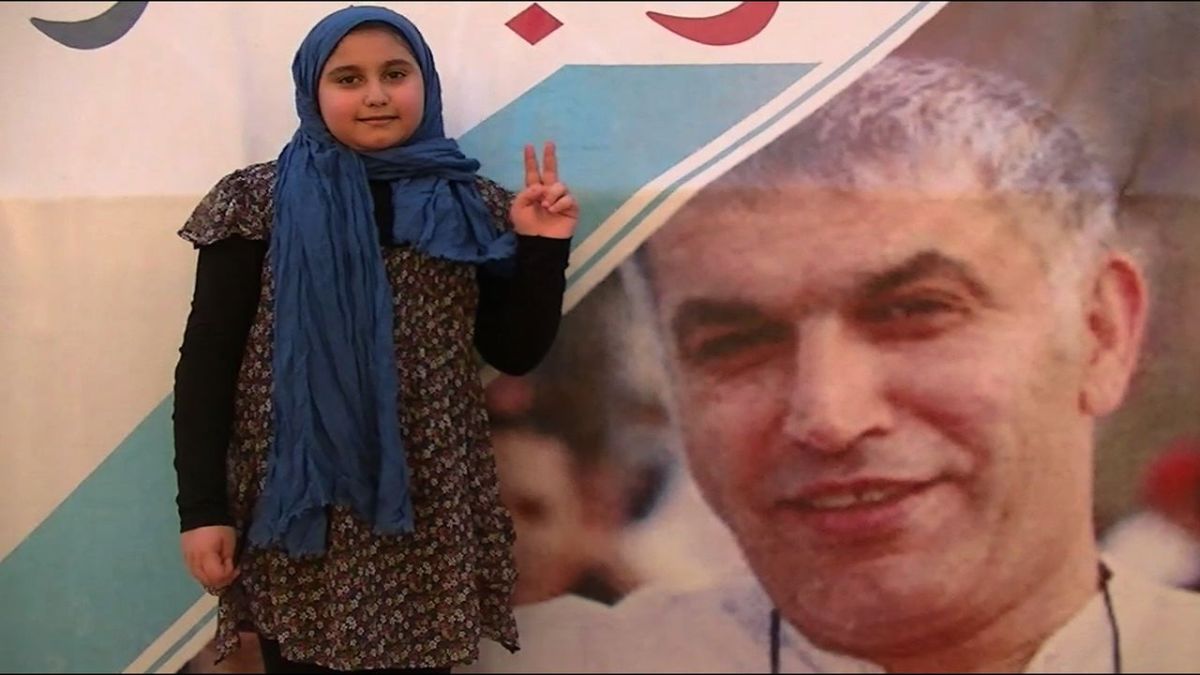 A woman I call M. strode down the main road of her village in a burqa, with a large red and white Bahraini flag wrapped around her shoulders, fluttering vigorously in the breeze. She carried a poster, which she allowed me to look at. It had four small plastic dolls glued to the surface. One doll, wrapped in a white shroud, lay inside a small yellow box. Two other dolls had black hoods covering their heads and faces. One of the hooded dolls hung from its feet. The other’s arms were bound behind its back. The fourth plastic doll was imprisoned behind strips of black tape and was next to some rubber bullets and a small plastic cylinder.

“They kill our children,” she explained, referring to the kingdom’s security forces. “They suffocate them. They use all kinds of weapons.” Her hand swept over the rubber bullets and the cylinder, which represented a tear gas canister. The bound and hooded dolls in stress positions didn’t require much interpretation, but she emphasized how commonly both male and female youth are tortured in Bahrain’s prisons.

Then M. flipped the poster over, revealing three black cutout figures hanging from nooses with paper bags over their heads. “We won’t accept anything but a death sentence,” was written in Arabic in black marker across the top. The effigies were identified with signs on their torsos: Salman, Khalifa, and Hamad, the crown prince, prime minister, and king of Bahrain, respectively.

“Hang them,” she insisted.

I had arrived in Bahrain five days earlier through Witness Bahrain, an initiative comprised of international observers reporting on the human rights abuses that the Bahraini regime has committed since many of its citizens began protesting eighteen months ago.

On February 14, 2011, inspired by events in Tunisia and Egypt, a group of anonymous youth put out a call to gather at the Pearl Roundabout monument in Bahrain’s capital city of Manama. Protesters were largely calling for political reforms, with a focus on instituting a constitutional monarchy and challenging the discrimination that the Shi’a majority faces at the hands of the Sunni monarchy.

The regime responded with violence, killing one protester. The demonstrations swelled, and the security forces responded with more violence. Demonstrators took over, were violently expelled from, and then returned to Pearl Roundabout, camping there until 1,500 troops from Saudi Arabia and the United Arab Emirates entered Bahrain, shoring up the Bahraini regime with the tacit support of Washington. The Pearl Roundabout monument, an iconic symbol of the uprising, was cleared of demonstrators and destroyed. King Hamad declared a state of emergency. All who had been involved in the demonstrations were targeted. There were mass dismissals from government jobs, thousands imprisoned, and hundreds of cases of severe torture and dozens of deaths.

Today, the uprising is characterized by near-daily demonstrations in villages all over Bahrain, where mainly nonviolent protesters are met with a barrage of tear gas and bird shot. House raids and arrests occur nightly.

It was at one such protest that I met M. Her hardliner sentiment seems to be growing more common. As young boys tipped over garbage dumpsters and dragged palm-tree logs and chunks of concrete to the middle of the road, trying to thwart riot police from entering the village, another woman told me vehemently that the only solution for Bahrain was overthrowing the ruling al-Khalifa family.

“You don’t believe in reforms?” I asked.

The woman made a dismissive motion with her head. “We’ve been hearing about reforms since the days of our ancestors.”

The protest began then, with call-and-response chanting:

“Oh, Prisoners of the country…”

“Your heads are not bowed!”

“Despite the increasing hardship…”

“Your heads are not bowed!”

Women, waving Bahraini flags and marching behind the men, made up approximately 50 percent of the demonstration. When tear gas canisters and bird shot ripped through the crowd, the women ducked inside the nearest houses, but as soon as the riot police retreated, the women slipped their shoes back on and went back to the village center to resume their protest.

What was J’s explanation for why women play such a central part in Bahrain’s Arab Spring?

“Women are the victims themselves,” J said. “They’ve been subjected to torture, to arrest. They were dismissed [from their jobs]. They are mothers of martyrs, sisters of prisoners … so that’s why they find themselves in a situation, like me, where they have to do something.” During the Pearl Roundabout days, women spoke publicly about their vision for the country. There was a tent at the Roundabout specifically for women to discuss their rights and demands.

“There has been more awareness among women about the need for freedom, democracy, and equality,” J said. “Now, rather than shopping in malls, you can see them on the ground protesting and asking for their rights.”

Women’s prominence in Bahrain’s uprising was not without struggle. Initially, the fiery human rights activist Zainab al-Khawaja told me, young men tried to force her to the back of the protests, for her own protection, they insisted. When they realized she was the daughter of renowned political prisoner Abdelhadi al-Khawaja, they stopped resisting her. Before long, some of them were thanking her for breaking those gender barriers and were expressing their support for women in the forefront of the revolution.

Before, J said, “it didn’t come into men’s mind that the women might be that strong and powerful.”

But the progress has not been linear. J relayed one disturbing incident, where she had been tersely reprimanded at a rally by a member of a leading opposition party for crossing the gender line in order to ask one of the organizers a question. And I thought back to a large rally I had attended. Men and women sat on separate sides of a rope. More significantly, all of the speakers had been men.

Nabeel Rajab, president of the Bahrain Center for Human Rights, opined that women’s struggle for full equality would be ongoing. The key, he told me, will be whether the gains women made during the uprising will remain when the revolution is over.

J took me all over Bahrain to observe women in action. I watched one woman single-handedly organize activities for traumatized children of martyrs and prisoners.

I accompanied two female doctors from Physicians for Human Rights as they went from house to house, documenting the long-term effects of continuous exposure to tear gas.

I stood next to a fearless young woman who photographed riot police attacking protesters with tear gas.

I interviewed a defiant female university student just hours after her release from prison, where she had been sexually abused.

I saw the bloody photographs of Zainab al-Khawaja’s shattered leg minutes after she was shot at close range with a tear gas canister. (Zainab has since been imprisoned.)

I filmed the steadfastness of Nabeel Rajab’s wife and ten-year-old daughter as riot police surrounded their compound, entered their home, and led Nabeel away to three months of prison for a tweet he wrote. (Rajab has since been sentenced to three years in prison for calling for, and attending, an illegal demonstration.)

And there was the in-suppressible J herself, constantly monitoring and exposing human rights violations via Twitter, Skype, and cell phone.

Late one night, J brought me to meet “Zeina,” a thirty-year-old teacher who coordinates an underground clinic in her village.

“On days of events, when I expect a big military presence, it means there will be shooting, there will be injured people,” Zeina told me. “So we prepare the location, the safe place to transfer the wounded from the clashes. I am one of the links in this chain until we get the wounded to the unit. I consider it a duty. This is my service for the revolution.”

J and I arrived at another village’s underground clinic (the living room of a family’s apartment), just as two female nurses were preparing to stitch up the head of a thirteen-year-old boy, shot with a tear gas canister. The boy sat on a thin mat on the floor, his head buried between his knees, as the women crouched down next to him, gauze, cotton balls, ointment, and rubber gloves strewn on the floor.

I could film, they said, provided that no one’s face was captured. The boy could be arrested for participating in a protest, and the nurses feared imprisonment and torture for treating him.

With primitive instruments and deft, gentle fingers, the women stitched the boy’s gaping wound closed, soothing him with murmured words rather than anesthesia as he screwed up his face against the pain.

“We have to do something,” one nurse told me, as she bandaged the boy’s head with gauze. “When I see this happening, especially to the children, I can’t just sit and do nothing.”

Would she say that on camera, with her face covered?

The nurse smiled and shook her head no. “I was already arrested, and they know me and even my voice,” she said. “It’s too risky.” She showed me a bone in her body that had been broken from torture she endured during her last imprisonment.

“Women will never stop in their path,” J said confidently as we drove away. “I’m sure that they’re going to take their place and have a role in the future.”

In my mind, I still see M and other women regrouping in her village, prepared to face tear gas and bird shot yet again.

“Yasqot Hamad!” (Down with Hamad!), the women chanted defiantly under the surveillance of a Ministry of Interior helicopter, hands raised in triumphant V’s signifying victory and steadfastness.

As the second round of marching began, I caught a glimpse of M holding up the poster with tortured, imprisoned, and martyred dolls, her Bahraini-flag cape buoyed by the wind.

Jen Marlowe is a Seattle-based author, documentary filmmaker, human rights activist, and founder of donkeysaddle projects. Her areas of focus include Palestine/Israel, Sudan, Bahrain, and the U.S. death penalty. Her website is http://www.donkeysaddle.org and you can follow her on twitter at @donkeysaddleorg.